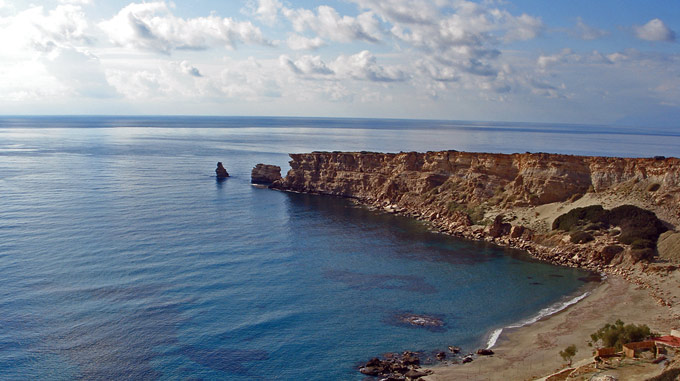 Its name comes from its dominating feature: three impressive rocks that emerge from the blue sea: two strands make it up – Large (at the west) and Little (at the east).

Essentially this division is occasioned by a small promontory that so creates two bays: this projecting land terminates in the three rocks mentioned, they are impressive geological formations. Beside them is a magnificent and spacious cave, which you can visit and partake of its shade.

The beach is sandy, with crystal-clear water – and breathtaking sunsets: a perfect setting for peace and quiet and so relaxation.

It is not a coincidence that a Yoga centre has chosen to operate here: in the summer months, it offers accommodation and conducts lessons on the beach; at night meditation sessions are conducted by the seaside, under the starry heavens.

Little Triopetra is a mildly organized beach – umbrellas, sunbeds and showers, whilst nearby you will find tavernas and rent-rooms. At the east end, called Stomio (the Mouth), there exists a small harbour.

The east part of Large Triopetra is similarly organized – a few umbrellas, sunbeds and showers, and 2-3 tavernas operating just off the beach front and rent-rooms.

Leaving these western beaches of Akoumiani Gialia, we move on to the east to the beaches of Aghios Pavlos.