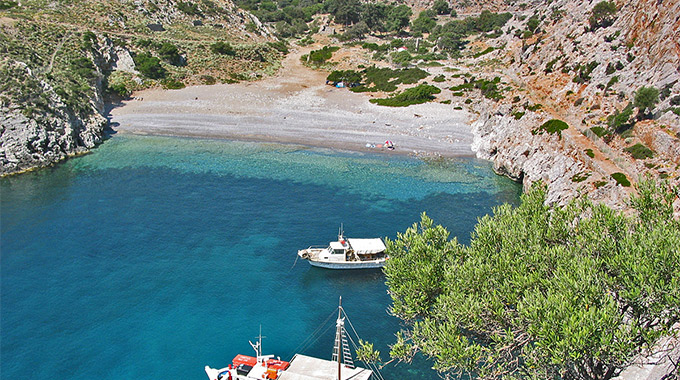 A lovely beach with sand alternating with pebbles, and crystalline waters that deepen suddenly. Sheltered, with rocks all around, it takes its name from the ancient temple to the goddess Britomartis, which stood here and attracted many worshippers (you entered on bare feet).

Britomartis was later equated with the goddess Artemis. Minos, King of Crete, conceived a passion for her: in his attempts to woo her, he pursued her for nine months. In her anxiety to escape his attentions, Britomartis threw herself off a mountainside into the sea. But she fell into some fishermens’ nets (diktua), and was saved. For this reason, she then took the name Diktenna, and the mountain from which she cast herself became known as Dikte (it still is!).  Today the only reminder of the existence of the old temple are a few scattered ruins behind the beach – some Ionic and Doric columns. In the Archaeological Museum at Chania is kept a headless statue which came from here.

The beach is ideal for relaxation and solitude, as there is no provision for food or shelter, though in other respects it is a welcoming spot. Thus, you must take thought forfood, water and whatever else you need, if you decide to visit